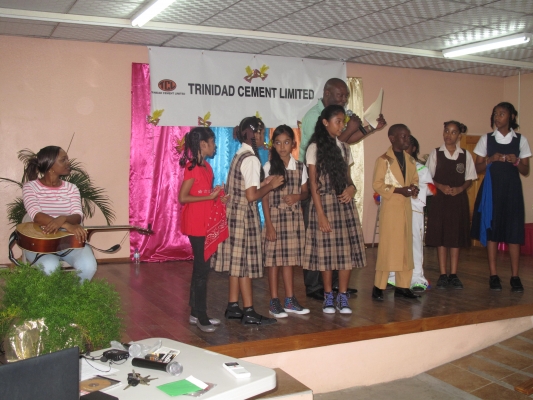 Ranging between the ages 8 - 12 the calypsonians performed songs they wrote themselves and were judged on their lyrical content, melody and overall stage performance including enunciation and vocal projection. The competitors were also excited to compete in a "sing along" segment where they were challenged to sing three popular Carnival songs word-for-word as well as an ex-tempo competition led by veteran ex-tempo champion and host Hezekiah Joseph.

The winner of the Calypso competition was Kwam Joseph, a standard 5 pupil of Claxton Bay Anglican Senior Primary School. The event was deemed a success by attendees such as TCL General Manager (Ag.) Mr Jinda Maharaj and COuncillor for the Claxton Bay and Pointe-a-pierre constituencies Mrs Shazeeda Nadia Mohammed. TCL was proud to see such a great start to this event and was reminded that in our Nation's small communities, great talent can be found blooming!

For more on our winner, Kwam Joseph, see the link to the newspaper article below.
http://www.newsday.co.tt/features/0,208302.html